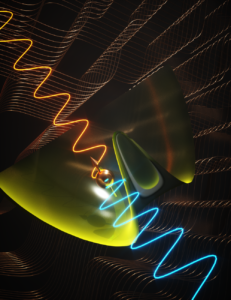 Researchers recently confirmed the presence of the axial Higgs mode, a particle excitation depicted here as a golden sphere. They used Raman spectroscopy, in which an incoming electric field, shown in blue, was coupled with the particle and subsequently scattered into a different frequency, shown in red. Credit: Ioannis Petrides and Prineha Narang/Harvard University

A Quantum Science Center-supported team has captured the first-ever appearance of a previously undetectable quantum excitation known as the axial Higgs mode.

This mode manifests as a low-energy excitation in rare-earth tellurides, a class of quantum materials notable for exhibiting charge density wave, or CDW, interactions. This behavior refers to arrangements of interacting electrons in quantum materials that form specific patterns and correlations.

Unlike the regular Higgs mode, which is produced by a Higgs mechanism that provides mass to fundamental particles in the Standard Model of Particle Physics, the axial Higgs mode is visible at room temperature. This characteristic enables more efficient and cost-effective experiments for manipulating quantum materials for various applications – including next-generation memory storage and opto-electronic devices – which would otherwise require extremely cold temperatures.

“This result is almost elegant in its simplicity — it’s really rare to find a new particle with a super clean signature without a lot of fanfare,” said Prineha Narang, an assistant professor at Harvard and a principal investigator through the QSC, a U.S. Department of Energy National Quantum Information Science Research Center headquartered at DOE’s Oak Ridge National Laboratory.

To measure the axial Higgs mode, the researchers used Raman spectroscopy — a nearly 100-year-old technique designed to characterize the structure and properties of complex materials — to observe pathway interference, which demonstrates the power of quantum mechanics to control matter. They found this interference of quantum pathways in multiple rare-earth CDW systems, and this phenomenon persisted up to room temperature and was insensitive to the mixing of the axial Higgs mode with nearby phonons, or vibrations in the material.

“Emulating the physics of an axial Higgs mode in a tabletop experiment opens new horizons in our understanding and use of exotic particles,” said Ioannis Petrides, a postdoctoral fellow in Harvard’s NarangLab.

Most notable quantum activity appears only at very low temperatures, which requires dilution refrigerators that rely on a limited supply of liquid helium. Otherwise, the physics of quantum materials tend to be completely invisible or obscured by noise, which can cause certain properties to phase in and out of view so quickly that they cannot be confirmed or properly studied. Although the team did cool their CDW samples, they discovered that the signature, or the wavelength produced by spectroscopy measurements, remained just as clean once the materials warmed up to room temperature.

The researchers anticipate that the axial Higgs mode likely exists elsewhere too, including in superconductors and magnetic materials, which would allow experimentalists to study and optimize quantum systems without relying on extreme conditions or large-scale facilities.

“There is a lot of interest in the axial Higgs mode because it provides a recognizable fingerprint that represents a quantum system without the need to see all the physics involved,” Narang said. “If you need to study an unknown material to determine whether it’s a spin liquid or a superconductor or something else, the ability to fingerprint the collective mode spectrum allows you to easily characterize it spectroscopically.”

Materials that harbor the axial Higgs mode could even be used as novel quantum sensors capable of categorizing other quantum systems, and further studies could potentially lead to a better understanding of pervasive anomalies, such as dark matter, that cannot be explained by the standard model.

This work builds on many previous research efforts and marks an important milestone in the hunt for exotic collective modes in quantum materials, including the axial Higgs mode. Narang describes this accomplishment as a significant step forward for multidisciplinary research focused on the intersection between high-energy physics and condensed matter.

“This breakthrough would not have been possible without having QSC-enabled, wide-ranging conversations with a diverse team of experts, including multiple women leading key quantum research efforts,” she said.