Narang recognized by the American Physical Society for QSC-supported science 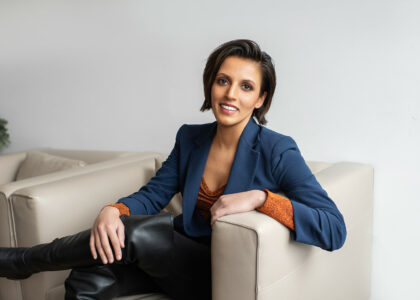 Article courtesy of the University of California, Los Angeles

Prineha Narang of the University of California, Los Angeles has been awarded the American Physical Society’s 2023 Maria Goeppert Mayer Award for Quantum Science Center-supported work on dynamics in quantum matter.

The award, named after a pioneering theoretical physicist and Nobel laureate in Physics, was established in 1985 to recognize early-career female physicists. Each year, the recipient presents her scientific achievements through a series of public lectures.

“I am delighted to join such a distinguished list of scientists who have won the Maria Goeppert Mayer Award in the past,” Narang said. “I am particularly excited about giving the public lecture and having the opportunity to share with the audience why researchers in our group think non-equilibrium dynamics and quantum materials are not only fundamentally important, but also technologically relevant and exciting.”

The citation for Narang reads, “for pioneering the development of ab initio computational physics approaches to light-matter coupling and non-equilibrium dynamics and their application to the understanding, prediction and design of quantum materials.”

As part of this QSC-supported research, her predictions led to the discovery and understanding of a previously undetectable quantum excitation, the axial Higgs mode, and mechanisms for the dynamical control of order parameters in correlated quantum materials.

Before joining UCLA earlier this year, Narang was an assistant professor at Harvard University. NarangLab, which was founded at Harvard, will also make the move to UCLA. Previously, she worked as an environmental fellow at the Harvard University Center for the Environment and a research scholar in condensed matter theory at the Massachusetts Institute of Technology. She received a master’s degree and doctorate in applied physics from the California Institute of Technology.

She has also been named a Moore Inventor Fellow by the Gordon and Betty Moore Foundation, a CIFAR Azrieli Global Scholar by the Canadian Institute for Advanced Research, an Innovator Under 35 by the MIT Technology Review, and a member of the Young Scientists community by the World Economic Forum.

Narang will deliver her Maria Goeppert Mayer lectures in 2023 on topics related to non-equilibrium physics of quantum matter.